Fun in the sun for St. Wilfrid’s Lodge

On Sunday 7th July 2019  Paul Simpson, St Wilfrid’s Lodge No 8350 2022 Festival Steward, and his wife Denise hosted a summer garden party at their home in Market Harborough to raise funds for the Leicestershire & Rutland 2022 Festival. 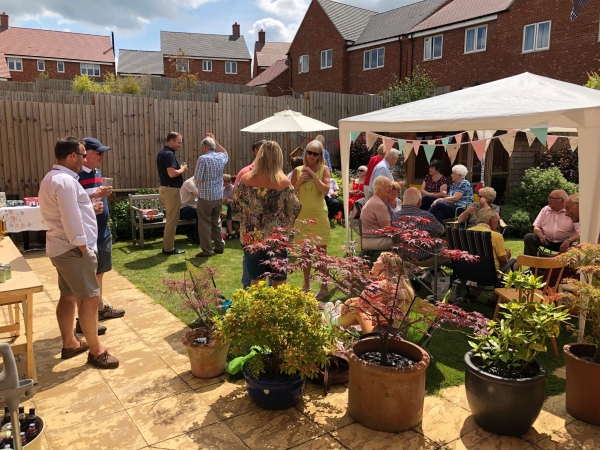 The event was well attended by nearly fifty members of St. Wilfrid’s Lodge No.8350 and their families. An enjoyable time was had by all in the glorious sunshine with an impressive cold buffet prepared by Paul & Denise. A raffle was held which was generously supported with a large number of donations from the brethren, which raised a total of £275.  There was also a profit made on the catering, leaving a grand total donation for the Leicestershire & Rutland 2022 Festival of £611.

Due to the success of both this years and last year’s  events, Paul and Denise have agreed to host this annually during the term of the 2022 Festival.

The sun was out, the sunblock was on, as twenty cyclists from Leicestershire & Rutland, Nottinghamshire, and Derbyshire Freemasons gathered in Leicester on Saturday 29th June 2019 for this year’s 83 mile Charity Cycle Ride, in support of the Rainbows Children’s Hospice and the Masonic Charitable Foundation. 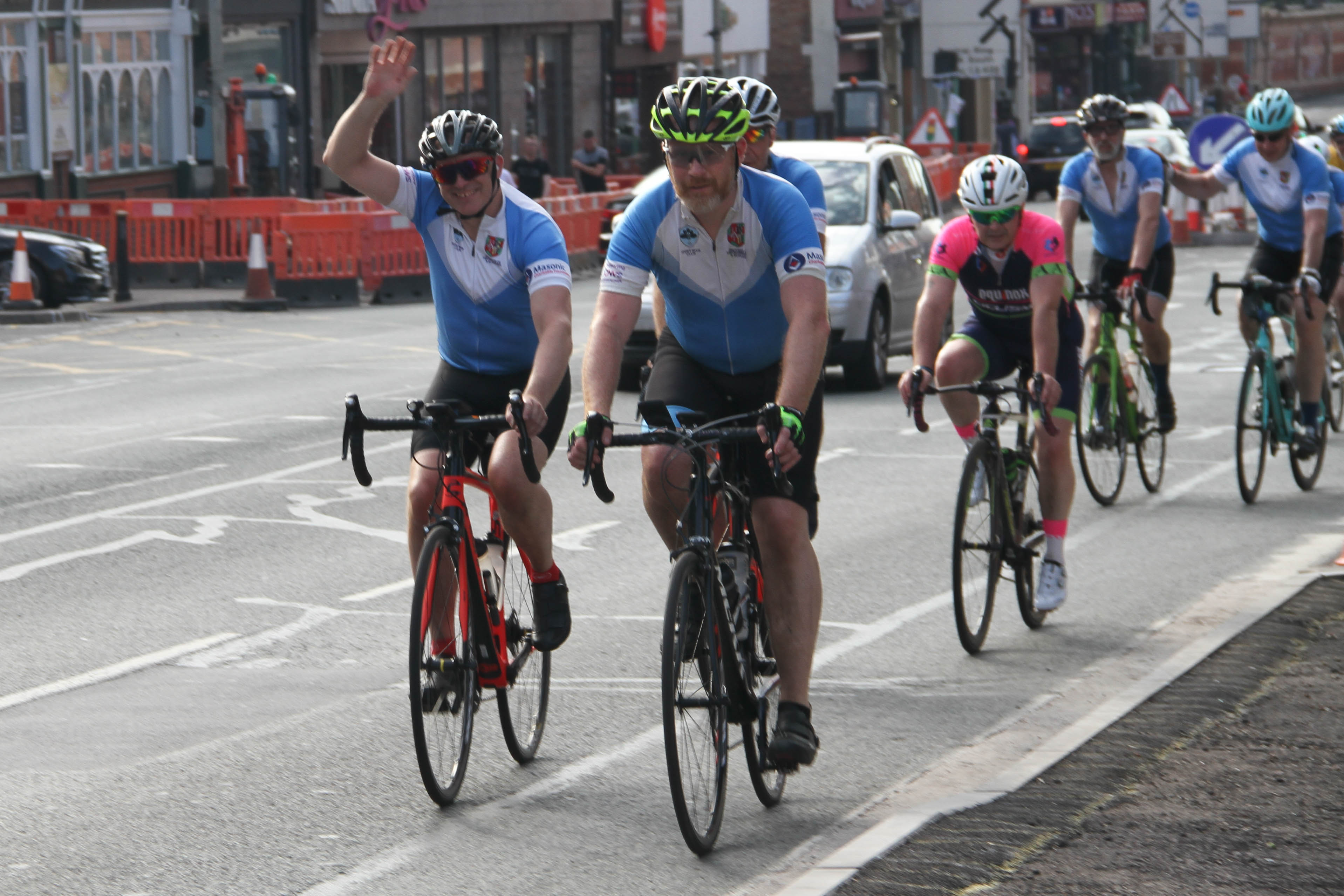 To wish them good luck on their journey, Helen Lee-Smith, Head of Individual Giving from Rainbows said: “Thank you so much to all of those taking part today, yet again the support from the Freemasons is essential to Rainbows Children’s Hospice”. Also there to wave them off was the Provincial Grand Master of Leicestershire & Rutland Freemasons, David Hagger who said: “We are all extremely proud of the work we do to support Rainbows and the Masonic Charitable Foundation, and thank all of those riders for raising such a fantastic amount today”

On the hottest day of the year so far, with temperatures well in excess of 33 degrees Celsius, twenty cyclists including Freemasons, friends and family set off from Freemasons’ Hall Leicester early in the morning before the sun was at its strongest.  The route took the four groups out from Leicester and on towards Loughborough before heading through Shepshed and onto Derby in the first leg of the journey of over 33 miles.

The first stop was at the Masonic Hall in Derby, where tea, coffee, bacon sandwiches and much needed water were in abundance.  The break was very much appreciated as the day was beginning to warm up, however time was of the essence, and it was not long before the next leg out through Long Eaton and onto Nottingham.

By now the temperatures were soaring, but that did not stop the determined cyclists to battle the searing heat and traffic as they arrived at the Masonic Hall in Nottingham for a rest in the shade and to restock with supplies.

The afternoon sun meant that water stops were frequent, but with determination and hard work, the cyclists made their way from Nottingham back into Leicestershire, finally finishing at Freemasons’ Hall Leicester at around 6pm.

On Wednesday 13th February 2019, W.Bro. Paul Simpson, the Immediate Past Master of St. Wilfrid’s Lodge was given the honour to once again take a seat in King Solomon’s chair to raise his son, Bro. William Simpson. The Master of the Lodge W.Bro. Richard Shepherd was delighted to make way for W.Bro. Paul on this once in a lifetime experience.  W.Bro. Paul accepted this kind gesture and proceeded to raise his son to the sublime degree of a Master Mason in what was an emotional ceremony. 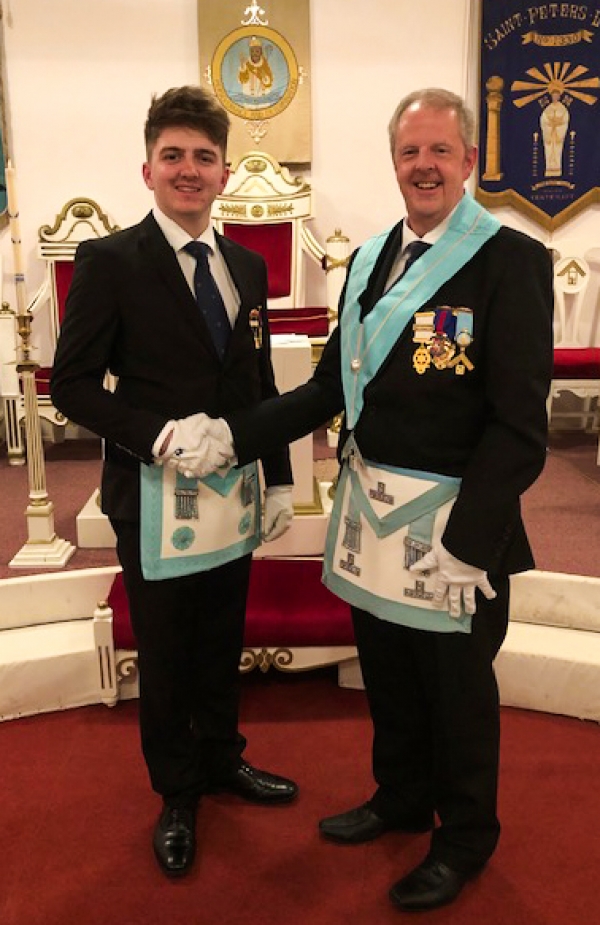 W.Bro. Paul said “I was very honoured to be given the opportunity to raise William and would like to thank the Master, Wardens, and Brethren of St Wilfrid’s Lodge for enabling me to conduct the ceremony. It was a very proud moment for both William and myself”.

Bro. William now lives in Liverpool having graduated from Liverpool John Moore’s University in July 2018. He now works as part of the Media Management team for Lime Pictures who produce T.V. shows such as Channel 4’s “Hollyoaks”.

The Lodge was furthered honoured with the presence of their mother Lodge, St Peter’s Lodge No.1330 who supported the evening in great numbers as per usual.

To round off an excellent evening and continuing the theme of “keeping it in the family”, W.Bro. Paul was also able to welcome as his guest, W.Bro. Alf Edwards of  St. Kenelm Lodge in Worcestershire, who will become W.Bro Paul’s father in law when he marries his daughter, Mrs Denise Line on Saturday May 4th 2019 at Hothorpe Hall.